PSP has native support for most PSX titles so if you want to convert your original PSX games to play on the PSP it’s a very simple process using PSX2PSP. Playing these converted titles requires custom firmware. Depending on the game you may need to use the CDDA enabler or POPSLoader plugin.

1. You first need to copy the contents of your PSX disc to your computer in .Bin/.Cue or .ISO format. If you are not sure how to backup/rip games to digital format you can follow this video. Note that you only need to follow that video up to 4:20. The rest is burning it to a blank CD.

2. Once you have your backup game in .Bin/.Cue or .ISO format you can open PSX2PSP. The main window will show a preview of what you will see on your PSP when you select your game.

3. Open the Convert menu and click the first drop down box. Select ISO/PBP File 1 and then choose the location of your backup PSX game. The rest of the text fields should populate with information about the game selected. Then choose an output location on the next line, this is where your EBOOT.PBP will be stored after the conversion.

ISO/PBP file is selected and the rest of the form populates. A custom Icon image is added.

4. If you want to make the game look nice on your PSP you can open Customize PBP and add custom images. If you want custom music when hovering over the game you can follow this guide.

5. Once finished customizing text and images you can click Convert in the Convert menu. Once the process is complete, you will have a folder named after the game title ID (eg. SLUS0001) and inside is the EBOOT.PBP. Move both the folder and the containing eboot onto your PSP memory card GAME folder. Disconnect from USB Mode and you will see your game listed.

Below is additional information to help with compatibility. Not all games run great, and some don’t run at all but overall the ability to play many PS1 titles on the PSP is a great feature.

POPSLoader allows the PSP to run older versions of “POPS” which is the PlayStation One Portable Station emulator by Sony. Some certain versions of POPS have better compatibility with different PS1 titles. If a certain game you are trying to play doesn’t work, this would be something to try.

Save your changes and disconnect your PSP. You may need to reboot or reset the VSH to apply the changes. Hold down R while starting a PS1 converted game and there will be a menu shown to select which version of POPS to boot the game with. 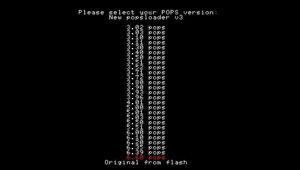 CDDA Enabler is a plugin by TheFlow to enable audio with PS1 games that have multiple bin tracks. Those games need to be merged into one file and then converted before using PSX2PSP. CDDA audio is disabled on POPS above 4.01 and new model PSPs like the Go or 3000 can’t play games on a really low POPS version. This plugin allows you to have audio without needing POPSLoader. There is a readme included with the download that goes into more detail of why it is used.

Download the CDDA Enabler file above and place the seplugins folder on the root of your PSP memory card. Edit POPS.txt in the seplugins folder and make sure it has one of the following lines. ms0 would be for all PSPs with a UMD drive and ef0 is only for the PSP Go internal storage.

Some PS1 games have multiple BIN files and that causes your PSP to have no audio when in game. You’ll have to merge the files and then follow the steps above to convert to EBOOT format. First download CDmage v1.02 Beta here. Run the installer and note where you extract it. Launch CDmage and open the CUE file of the game you want to merge. Select and highlight the cue file in the image tree (eg. Image [Twisted Metal 4 (USA).cue]. Go to File and Save As. Choose a new directory to save this merged BIN file and CUE file. A Prompt will show save options, just leave them as is. Once converted you can now convert the game with PSX2PSP and use CDDA Enabler plugin to hear the audio. 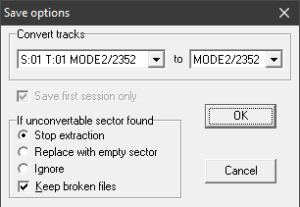